Years ago- more than I care to mention- I was an 11th-grader in advanced placement English in Western New York. The gifted instructor in this course and the exciting reading list opened up a whole new world for me. With my teacher’s guidance, and the stimulating class discussion we 16-year olds had about every book introduced in class, I learned more than I ever would have without this special educational experience. With this preparation, I became a journalist and a writer.

The objections from those who oppose the book’s being included among readings for St. Mary’s County students seem to be to graphic language and explicit sexual themes in Morrison’s novel. True, they are there. However, they are there to be interpreted, discussed and understood. The situations in this book represent a teaching opportunity for our faculty and a learning opportunity for our youth.

Students can still check the book out at their high school libraries if they wish- and read it without the guidance they would have received in class. Does this make sense?

Please give our teachers and our young people credit for being able to explore and learn together from literature that may present difficult challenges.”

No Commissioner Has Ever Received a Nobel Prize:

Let me tell you, I love living in a county that restricts Toni Morrison. I am referring to the article placed in your Jan. 16 issue, concerning the county commissioners’ support for the banning of Toni Morrison’s “Song of Solomon” from the AP curriculum. To briefly recap your article, it was stated that the commissioners supported the ban because of their “exhaustive” two page research on the novels most graphic portions. By graphic, I mean the aforesaid portions contained explicit sexual situations. Although none of the commissioners actually read the novel, this is understandable, as they probably have more pressing issues, such as striking the First Amendment.

What really ticks me off is that the commissioners are supporting this ban based on two pages of reading. Two pages of selected graphic material! Commissioner Lawrence D. Jarboe went so far as to call the book trash! I wonder if he would do the same thing if I took out a few nasty portions of the Bible- like the sins of Sodom, or Cain killing Abel, and told him this was part of the AP curriculum.

Now before the public accuses me of comparing “Song of Solomon” to the Good Book, let me say that “Song of Solomon’ is not the Bible. It is a work of literature, and from what I understand a pretty good one. And literature (like life), is at times, not pretty. Sex is a situation we all deal with at one point or another, and as I understand, a fairly important factor in propagating the species. Then again, if Toni Morrison is being restricted here, the repeal of sex education must not be far off. So maybe I’m just spouting non-sense.

Yet sex is a major source of conflict and angst in our society, and it is much more acutely felt during the mid-teen years. By ignoring it in a work of literature, we do not necessarily solve its problems in the real world. On the other hand, by trying to understand it in a work of literature, we perhaps move closer to understanding it in the real world. In any case, the question of “Song of Solomon” has not been posed to the students, the people who actually are affected by this controversy, so maybe all of this bickering is a moot point anyway. If students are treated so condescendingly, maybe they really don’t have the maturity to deal with Toni Morrison. I’m an AP student, and God knows I’ve never won a Nobel Prize. “ 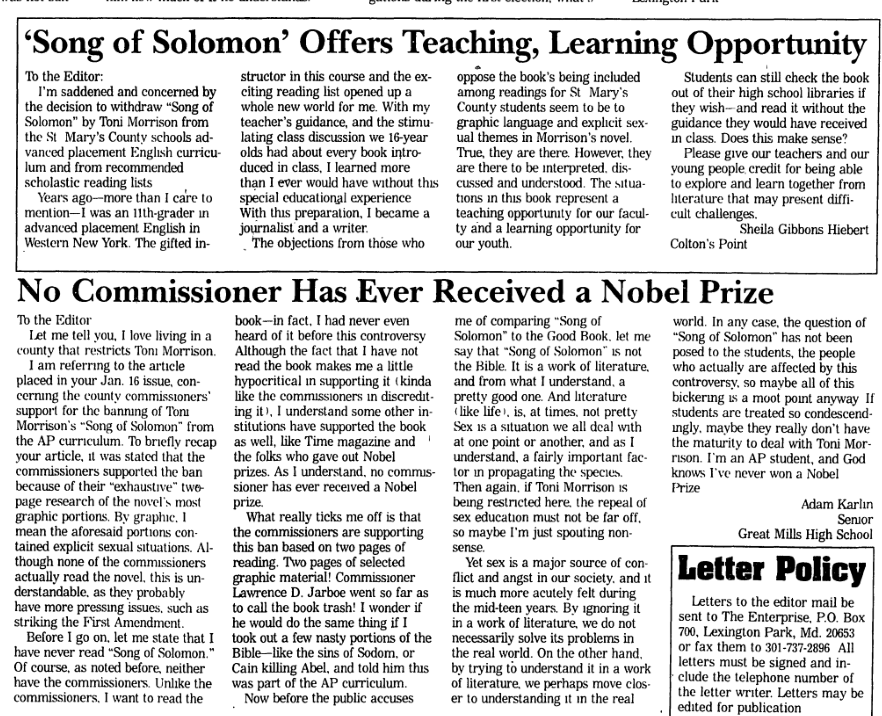